I won’t discuss research in detail here, but I did spend a good amount of heads-down time at my computer. The FLAN project has been the biggest work I’ve been a part of.

Weightlifting. I did not improve much on this end, as my bench pretty much stayed at 155 for 5x5 for the entire 3 months. At the time of writing this (Oct 14), I can’t think of any excuses for why. I think one reason is that I did not eat as well.

Tennis. I also did not get to play tennis as much as I wanted, though the few times I did play I felt like I was hitting well. Especially when Ian was there, he would give me good tips like stepping into the court and hitting through the ball. I even beat Abhishek in a baseline game to 11 once, maybe one of the highlights of my tennis career.

In September, our family moved from Virginia to a house that my mom bought in Plano, Texas. It will definitely be a transition period for our family, as my brother will also start college, and I think it’s a good opportunity to gain new perspective on the important things in life. So far, the house in Plano is a much more appropriate size, and it’s relatively modern. The location is great, as we can drive to a grocery store in 3-4 minutes, and probably more than a hundred restaurants within ten minutes. Before, it took 5 minutes just to drive out of our neighborhood!

Seeing world class tennis players play in person was a significant experience for me. On the first day for R1, John, Allen, and I got front row (corner) seats to see Nick Kyrgios play Roberto Bautista Agut. In person, Kyrgios actually hits a very smooth backhand and a very hard forehand. RBA somehow got everything back. It was amusing that Kyrgios kept refusing to put his towel back in the towel holder and opted to throw it onto the floor instead. Overall, however, the match was a bit disappointing, as Kyrgios kept missing his first serves and lost in three sets. Before that match, we also saw Aryna Sabalenka play Nina Stojanovic, which was a great match (I developed a small crush on Stojanovic).

The next weekend, I made a day trip with Abhishek and Ash to watch Djokovic play Nishikori for R3. We got second ring seats in Ashe stadium for around $400, which weren’t that close but were still pretty good. Watching Djokovic play was simply inspirational. He is basically a god at the sport and has mastered every physical and mental component of the game. Even though he lost the first set, he did not seem bothered with a short-term loss and knew that he was still going to win. Djokovic’s backhand and strokes on the run are pure beauty. Watching the best tennis player in the world play has inspired me in terms of isolating each component of a craft (whether tennis or research) and mastering them all. Moreover, other people may have certain strengths, but you should work harder than them and develop even stronger weapons (for Djokovic, this is movement, return, and backhand).

My favorite part was really the practice sessions, though. I basically stood at the fence and saw a lot of good players practice. Naomi Osaka hits very heavy shots. Medvedev is tall and hits powerful, low, flat strokes. Simona Halep radiates intensity and focus (she might have made eye contact with me while picking up a ball). Rublev ruthlessly crushes every ball. I also saw Felix Auger-Aliassime, Gael Monfils, Shapovalov, Schwartzman, and Taylor Fritz. During Dimitrov’s R1 game, I sat one seat away from his girlfriend and his coach.

Finally, great revelations sometimes spawn at the most banal moments, literally. To enter the US Open, John and I waited for more than an hour in a “no bags” line. The line next to us, for people with bags, was much longer. However, because there were ten metal detectors in that queue and only two metal detectors in our queue, the people in that line got in much faster. And so the lesson is that absolute position matters way less than velocity. This is broadly applicable. For example, it matters less how good I am at tennis today than how fast I am improving; it matters less how good of a researcher I am today than how much each paper I write is better than the previous one. 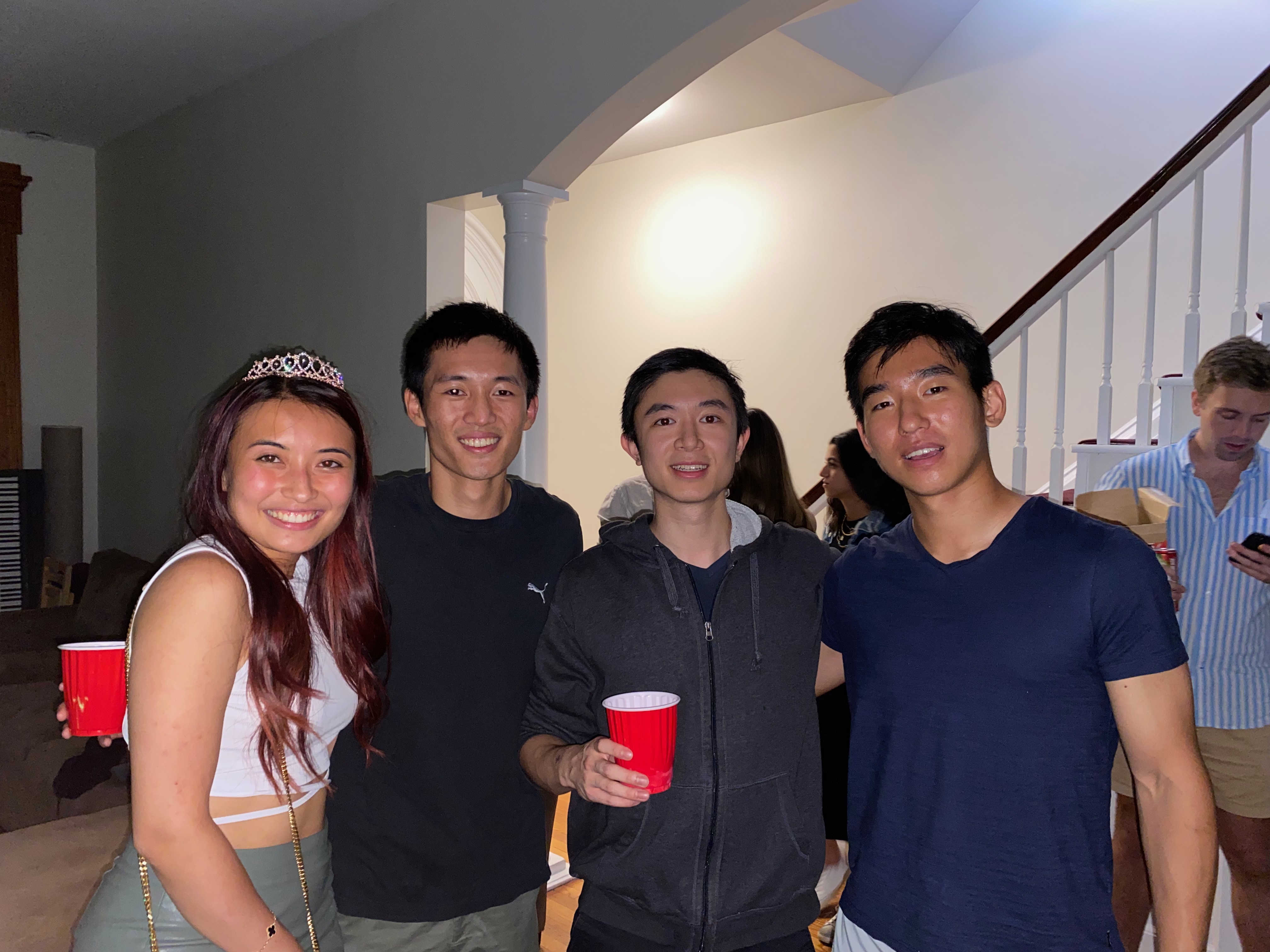 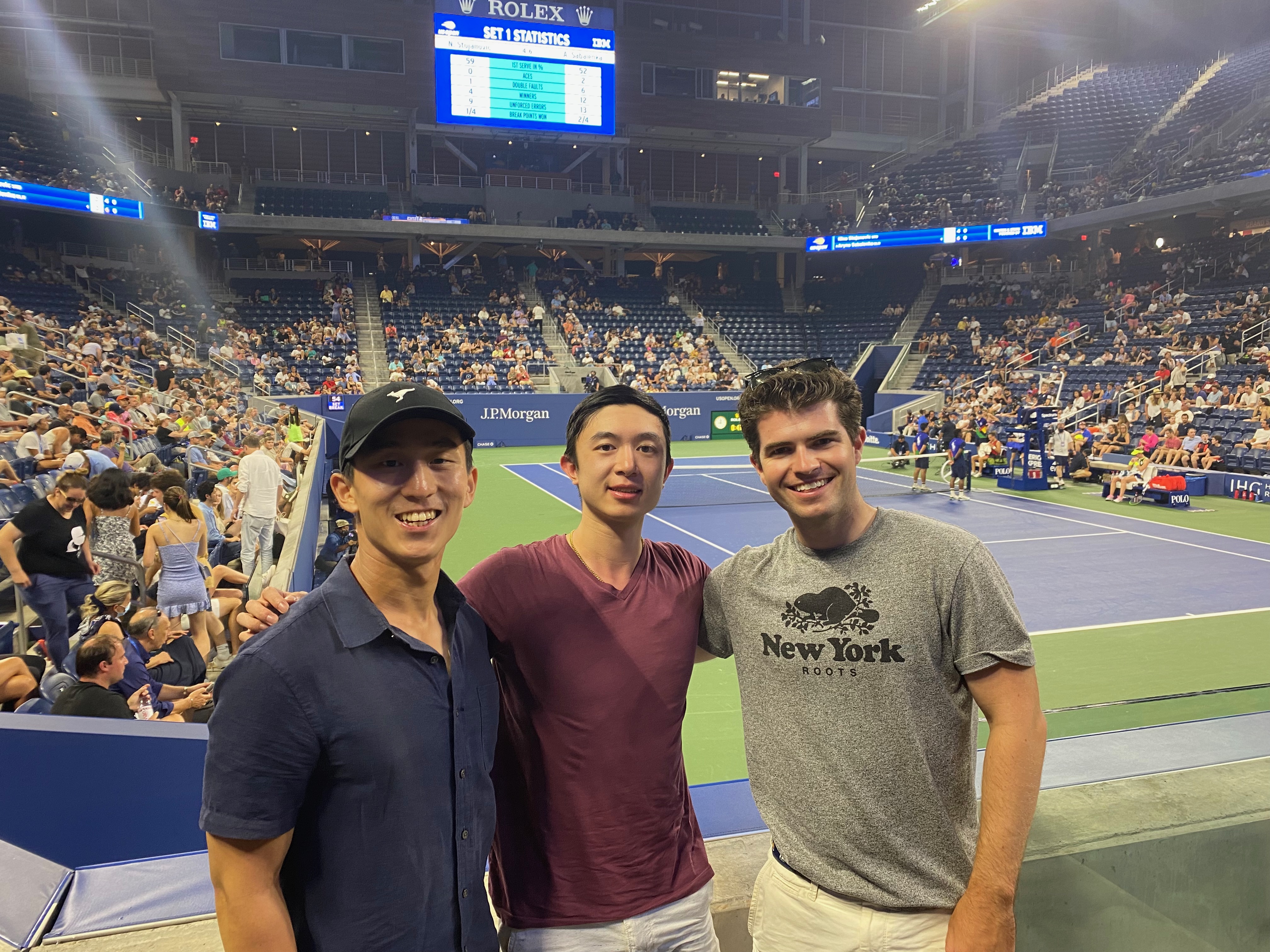 Left: Shirley, Eric, Me, and June at Shirley’s birthday party. Right: Allen, Me, and Sully at Armstrong stadium for the Sabalenka-Stojanovic match.

All footage I recorded from the US Open is [here].

I made a nice trip with family to Washington DC. We went to the Museum of American History, where my brother and I particularly enjoyed the Military History exhibit. Then, I walked around from the national mall to the lincoln memorial. Passing the WWII memorial and to the Lincoln memorial along the reflection pool, I thought about the sacrifices that those before us made so that I could have freedom in my daily moments. This experience underscored how fortunate I am to have this life, and the reason why present also means gift. So many before us gave their lives so that we could have the freedom and opportunities in ours—it would be disrepectful to waste their sacrifice by watching youtube all day. It is sad to leave such a beautiful city that I grew up near but hadn’t visited much.

I then went back a couple of days later to visit the Museums of African American History and Natural History. The Museum of African American History is a stunning experience that helps bring light to the challenges overcome by Blacks in America. Particularly touching was the the first exhibit, which documented the lives of free and enslaved Blacks from 1400 to the American Civil War, who were treated basically as commodities. I think as we gain a better understanding of neuroscience and human consciousness in the future, the abhorrence of slavery will be even more recognized. I also noticed that as an adult, I was much more open to learning about history, which I now see as a study of the most significant events in human well-being, than when I was forced to learn such things in high school.

I also saw the Museum of Natural History briefly, though it seemed like it’s mostly for kids. I enjoyed the exhibit on “Human Origins”, though.

This essay is a short and sweet argument against lying, especially white lies. Lying means intentionally misleading someone when they expect the truth. The summary of the argument is that (barring extreme situations) telling the truth may cause to uncomfort in the short term, but leads to better outcomes in the long run.

These are the two arguments I found most compelling.

Honesty as a filter. First, honesty acts as a filter for the people around you. For instance, if a friend asked me to read a manuscript they wrote and I thought it was bad, I might be compelled to lie and say that it’s good so I don’t hurt their feelings or explain why. But upon a closer analysis, it becomes obvious that honesty actually leads to a better outcome. Let’s say my friend wanted uninhibited feedback on their manuscript. By telling them what I thought wasn’t great about their work (and this can be done in a nice way!), I’ve potentially saved them from future rejections or receiving the same criticism from their advisor. Moreover, next time they send me a manuscript and I say I do like it, they know that it’s worth something. On the other hand, if they are offended that I didn’t like their paper, then they won’t interact with me further, which is actually a good thing because I do not want to interact professionally with people like that.

Truth as a mirror. The second reason to always tell the truth is that it holds a mirror in front of yourself. Let’s say that you are canceling a date with a girl because you think she’s too fat. Lying and saying that your car broke is easy enough, and you wouldn’t think about it any further. But if you are always honest, you have to comfront the honest truth about yourself, which is, what kind of person are you to not go on the date just because the girl was fat?

At this point, enough people who I admire from various walks of life (Mark Manson, Randy Pausch) have preached the value of honesty that this is a no-brainer for me.

One interesting thing that I’ve been thinking about is how one could “program” oneself in the spirit of self-improvement. From a first-principles standpoint, the person you currently are is a function of the sum of your past experiences. This is analogous to a neural network being a function of the data it is trained on.

As a concrete example, one who reads the work of great writers every day is likely to adopt the style and thought processes of those writers, leading him to produce high quality writing. Conversely, someone whose friends are into alcoholism are more likely to value such activities.

The action item for me comes from the realization that I consume multiple hours of video every day. Some video is obviously much higher quality that other video. For instance, spending a year listening to Sam Harris podcasts will likely be a better influence than watching all the Kali muscle videos on youtube. What if I limited my experience consumption to the content most likely to have a positive influence?

In this vein, here is a list of what I consider positive influences—specifically, how each person can rub off on me positively.

Overall, it was a term where I put in a lot of hours into work.

Impoding the mirage by The Killers is soulful.