I spent the summer in San Francisco working as a software engineering intern at Blend. Like some other terms, I grew tremendously, both personally and professionally.

Interning at blend was my first experience in web development, and coming out to the Bay Area and meeting other interns exposed the difference in technical education between someone like me, who has only taken one-software related course (Dartmouth has a liberal arts curriculum), and people who went to school at places like CMU and MIT. The difference in technical ability is obvious, and I definitely felt imposter syndrome at times. (Some other dartmouth students and grads also said that they felt similarly.)

I loved working at Blend, however. The culture is great, with flexible hours and not too much pressure, and I had many opportunities for bonding with co-workers and other interns including having lunch together, playing ping pong, doing 1-1’s, off-sites, blubs (blend clubs), and intern events. I first worked on the TypeScript service template, implementing the config as an object instead of a module and changing the linter from TSLint to ESLint. For the second half of my internship, I created an error tracker library to facilitate our migration from Airbrake to Sentry. The best part of my internship was learning from my mentor Danny, who is an incredibly talented engineer. I improved considerably over the summer but still have a long way to go in terms of coding style, system design, reading and coding speed, and overall productivity. 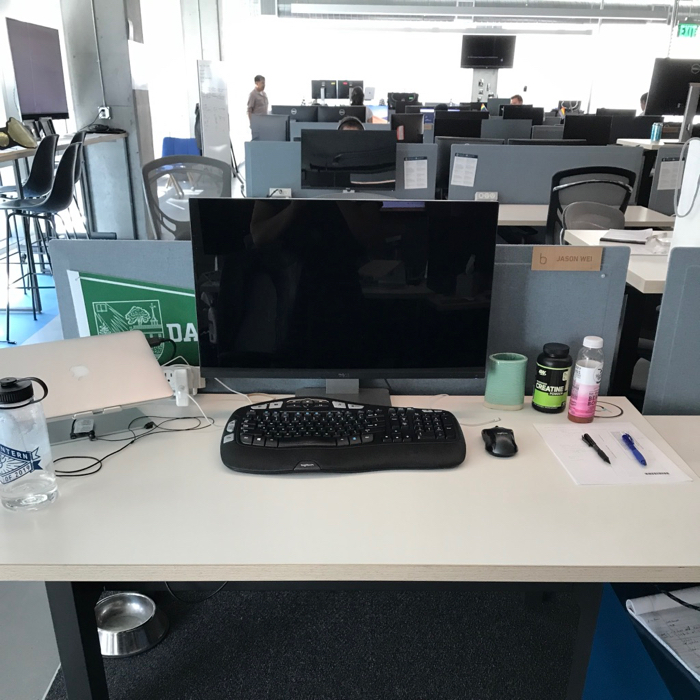 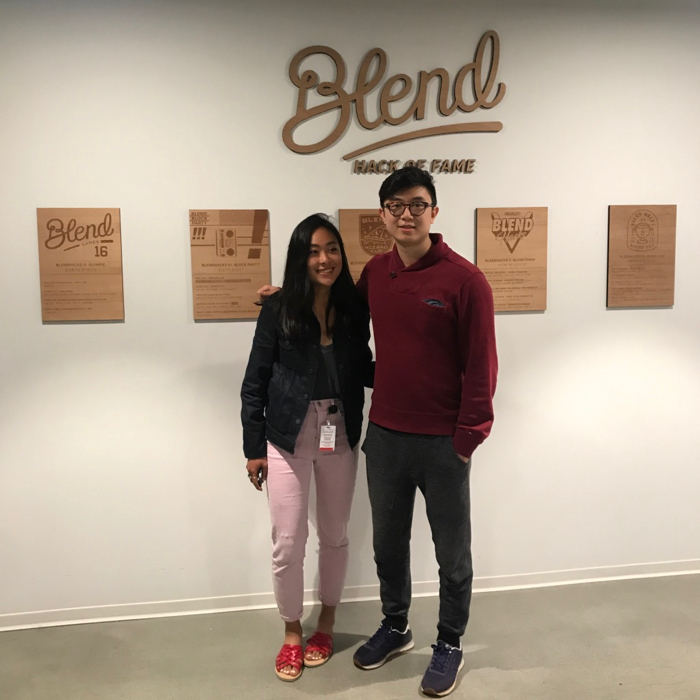 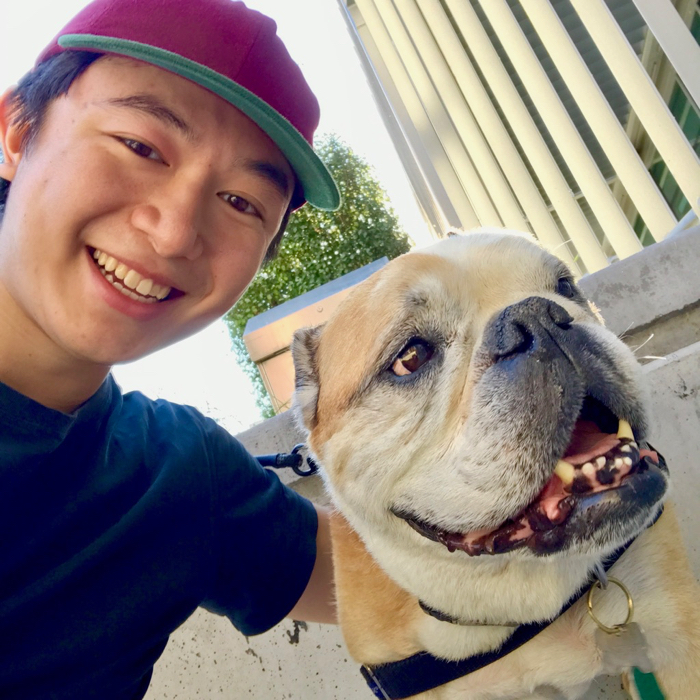 Left, my desk at blend; middle, my cousin Jeanine and I; right, Bart, one of the cutest Blend dogs.

For the Blend Hackathon, I formed a team called Data Cartel with another intern, a support engineer, and people from Business Ops, Client Ops, and Sales. I originally wanted to go around the second floor (non-engineers) and see what I could automate with ML, but eventually we decided that to create a program that automatically sends feedback surveys to clients after working with them and integrates with Salesforce and Slack. We won the Honorable Mention - People’s Choice award! The prize was $750 for us to have a Michelin-starred dinner.

We had some great company/team/intern events: 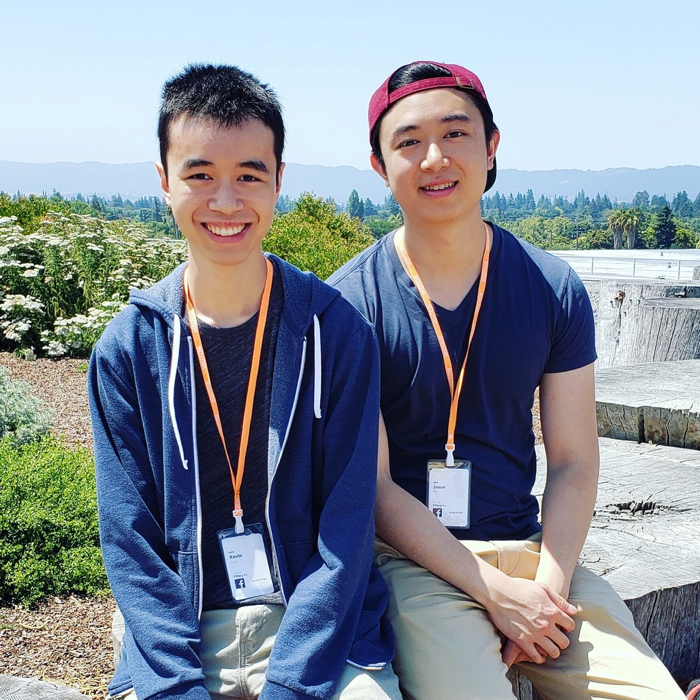 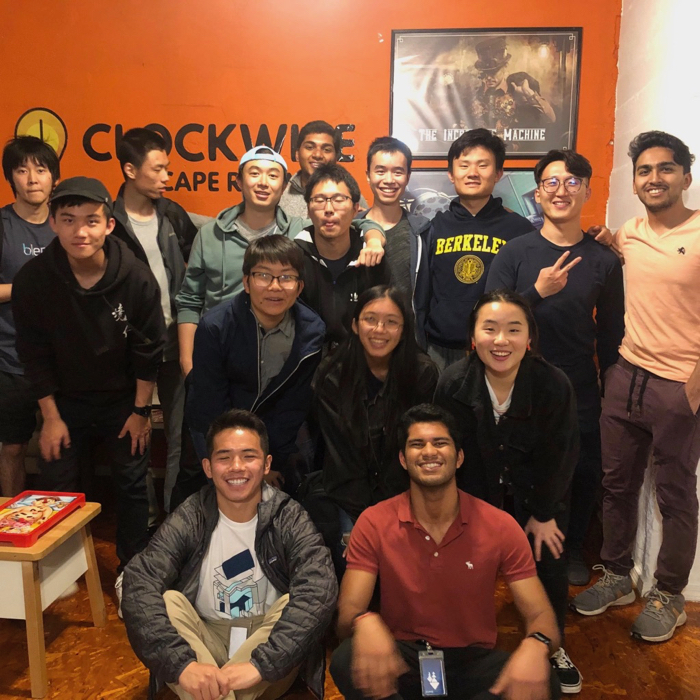 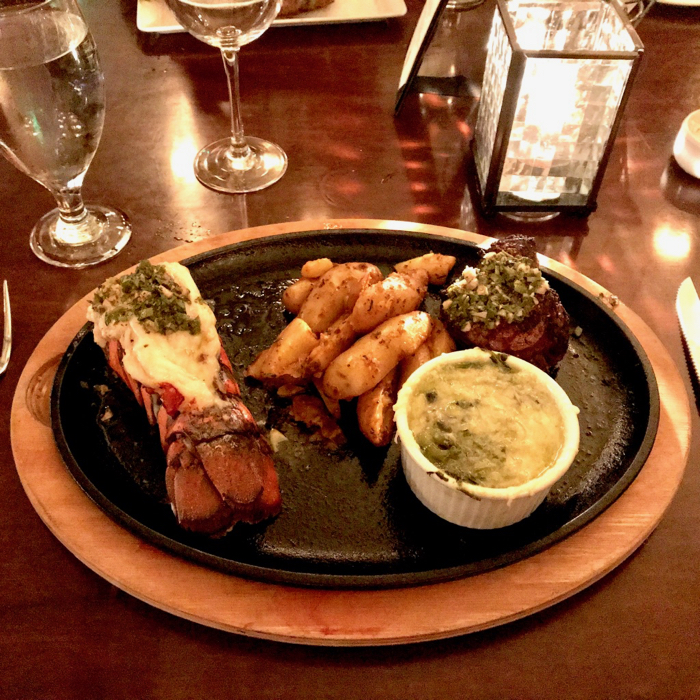 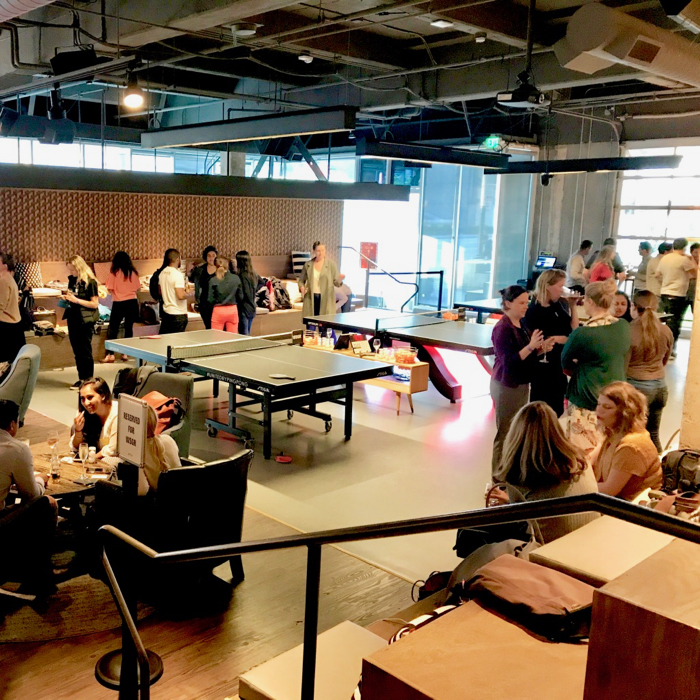 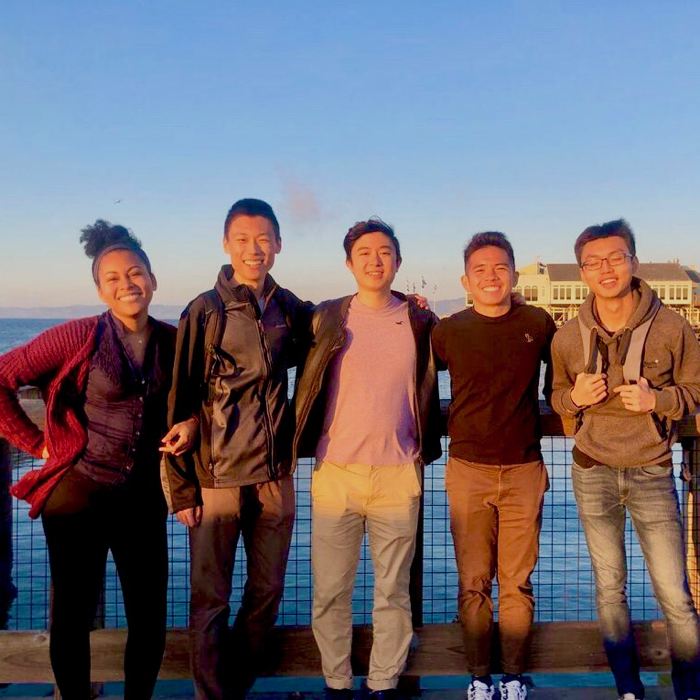 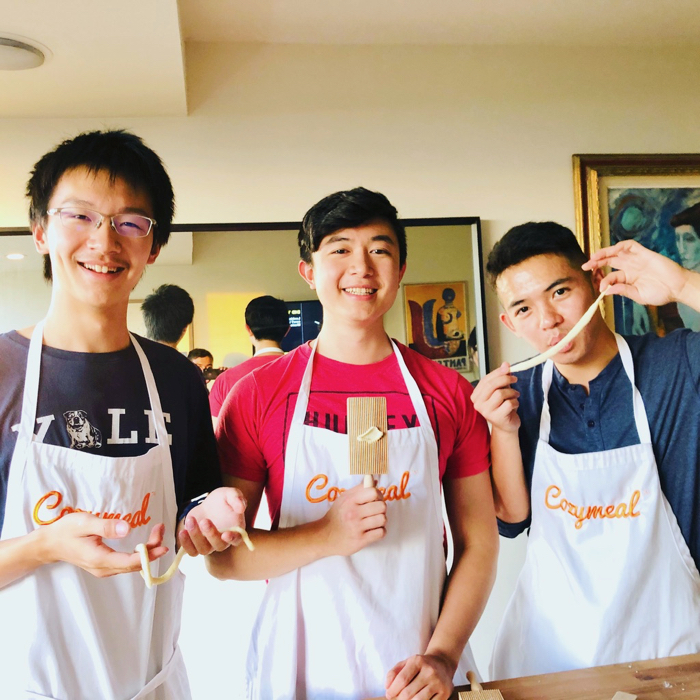 I have mixed feelings about San Francisco. The city is full of constant stimuli, there’s a lot of homeless people, and everything is expensive. I lived in a student house in Chinatown just a couple of blocks from work. The weather, social scene, and career opportunities are incredible, however. I would definitely consider living in SF after graduation, but perhaps Seattle or a smaller city like Denver would be better for me.

I had many friends in the city, from Dartmouth, Tri-Kap, Blend, high school, and the student house I lived in. I hung out frequently with Kevin and Yuxuan (Blend), Adit and Ashar (roommates), Kevin (Dartmouth), Yifei (Tri-Kap), Alex (Tri-Kap/Blend), and Abhishek (TJ). 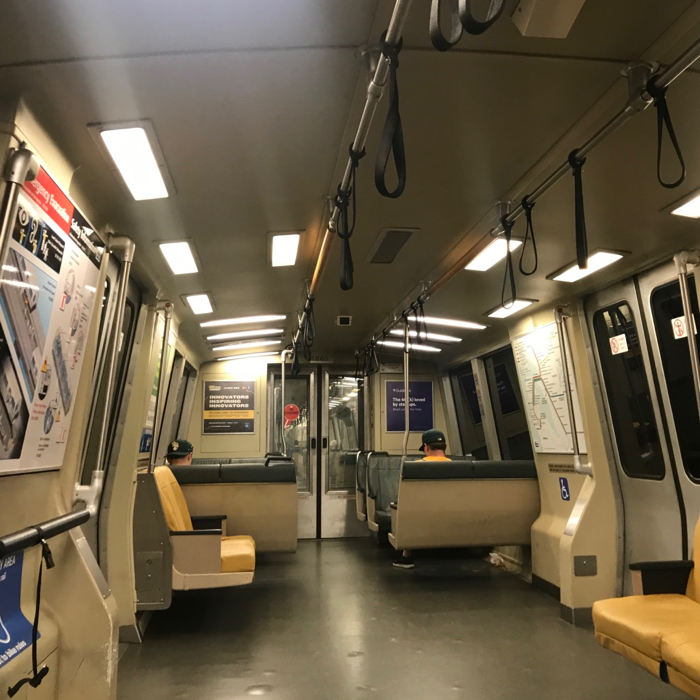 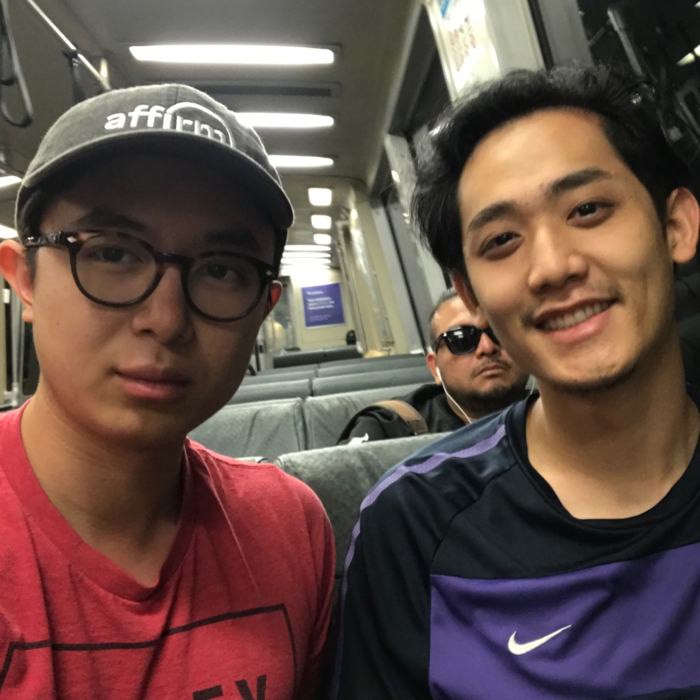 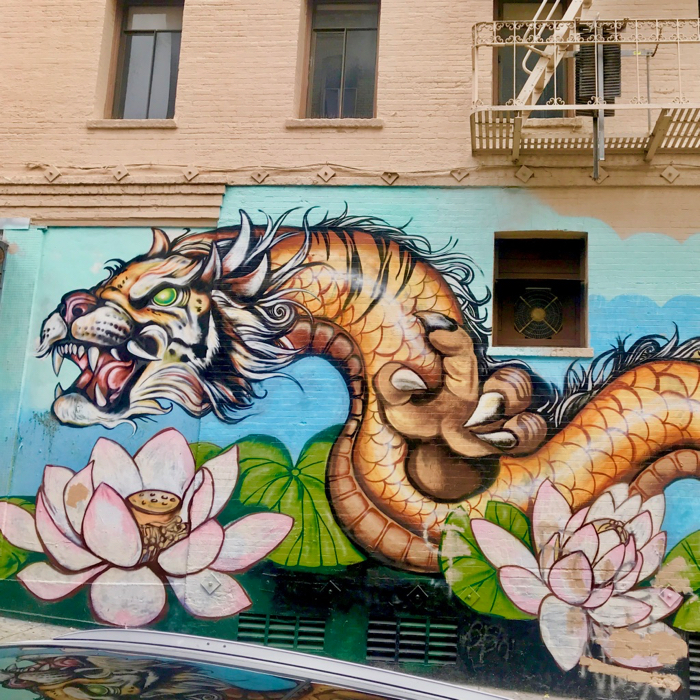 Left, the futuristic-retro-dystopian BART public transit; middle, my friend Yifei and I on the BART; right: the street art outside my house in Chinatown.

I had my first Michellin-starred meal, our team’s Hackathon prize, at Gary Danko. I got four entrees: Roast Maine Lobster with Potato Purée, Horseradish Crusted Salmon Medallion, Pork Tenderloin with Confit Pork Belly, and Seared Filet of Beef with Yukon Potatoes. The lobster with potato melted in my mouth and had so much flavor. I noticed so many details in their service such as presentation of food, folding my napkin when I went to the restroom, and thick toilet paper. I’m hooked on the fine dining experience now but will do my best to avoid it. 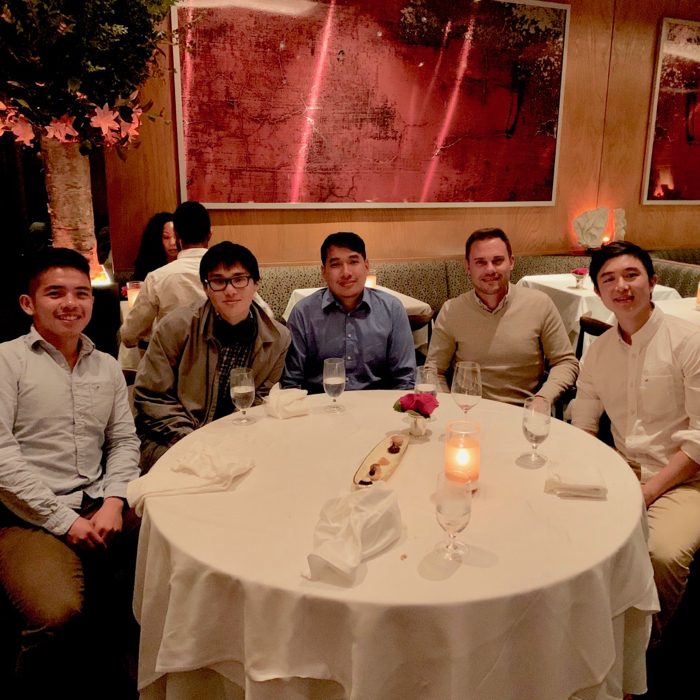 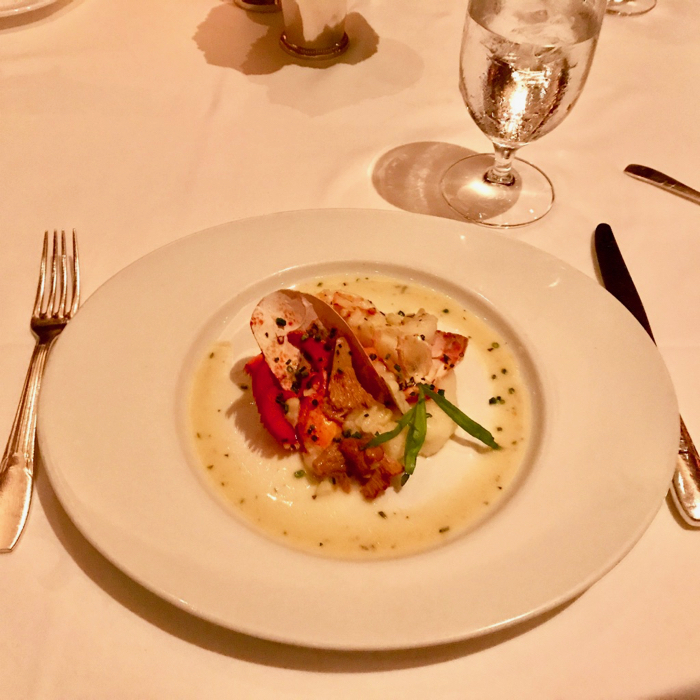 I really enjoyed living in a student homestay in Chinatown. It was only 2 blocks from Blend, and so I spent very little time comuting and could easily go to Blend to do work on weekends. Although the house was old, my room was small, and I often had to wait to use the bathroom, it was great to be in the company of housemates and my host Shelli, who has many talents including writing, directing plays, and contortion. As a software engineering intern, it can be hard to meet a diverse set of people, and so I’m happy to have interacted with my housemates, and even go to a 1840s themed dance party with Shelli. 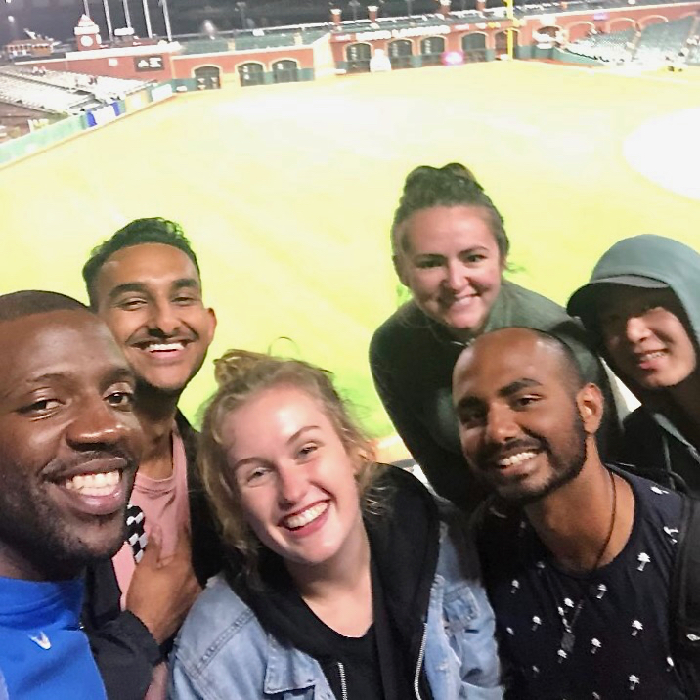 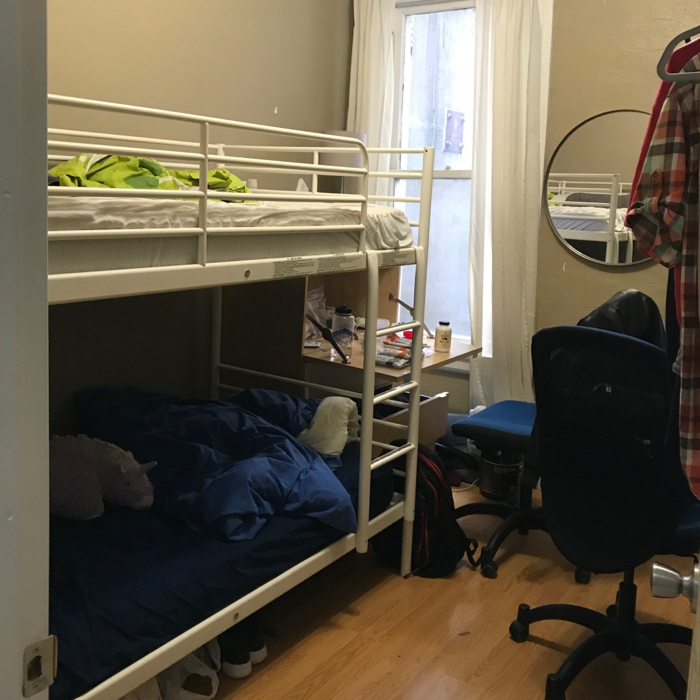 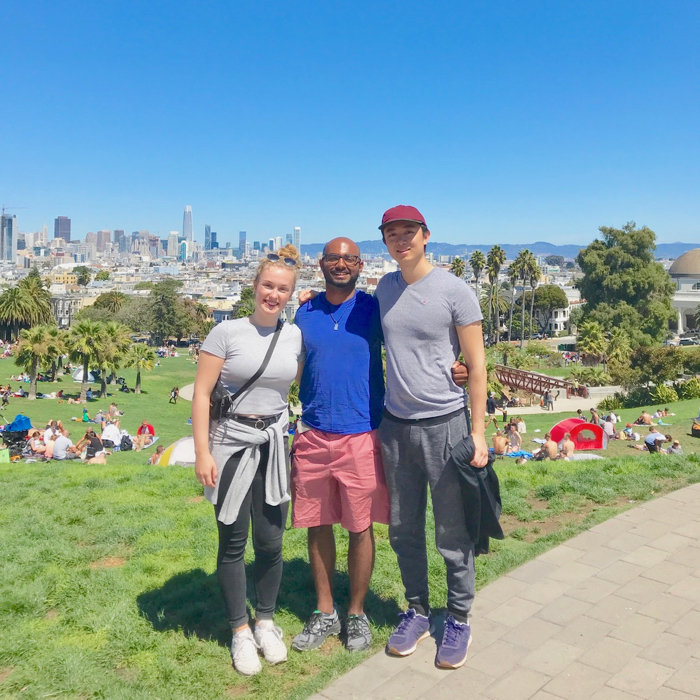 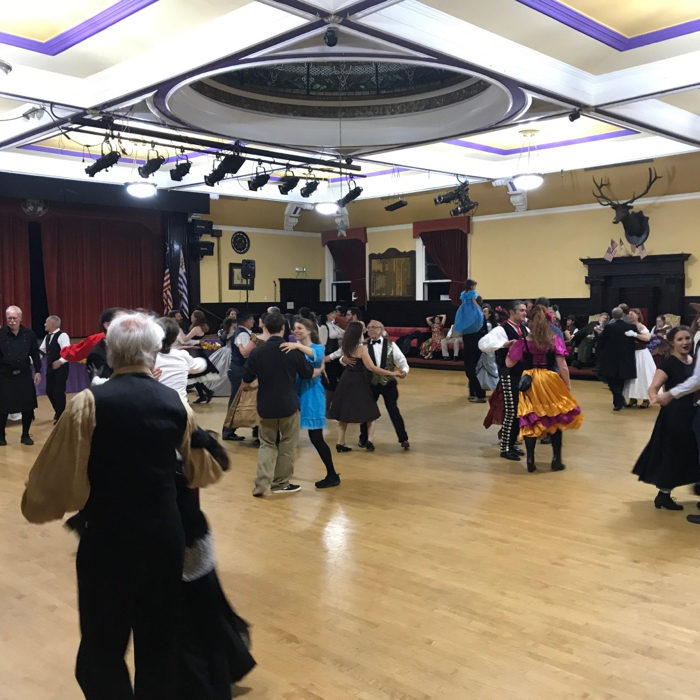 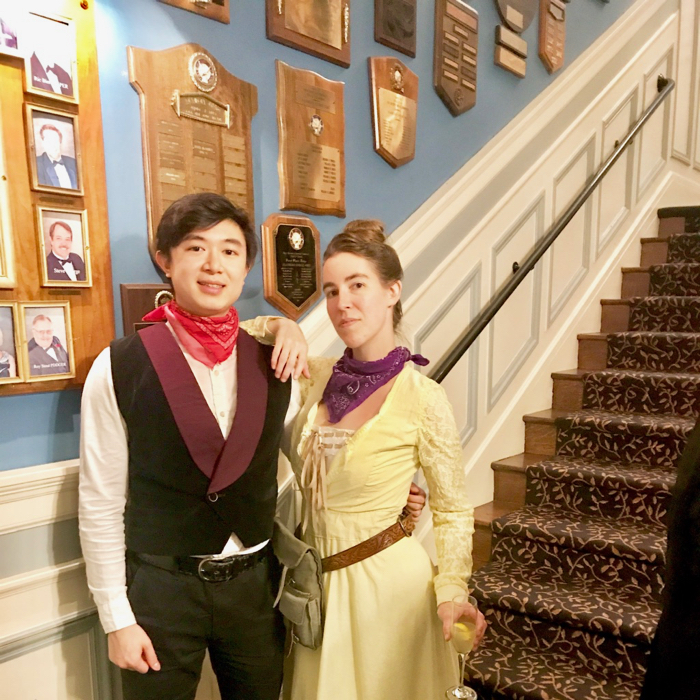 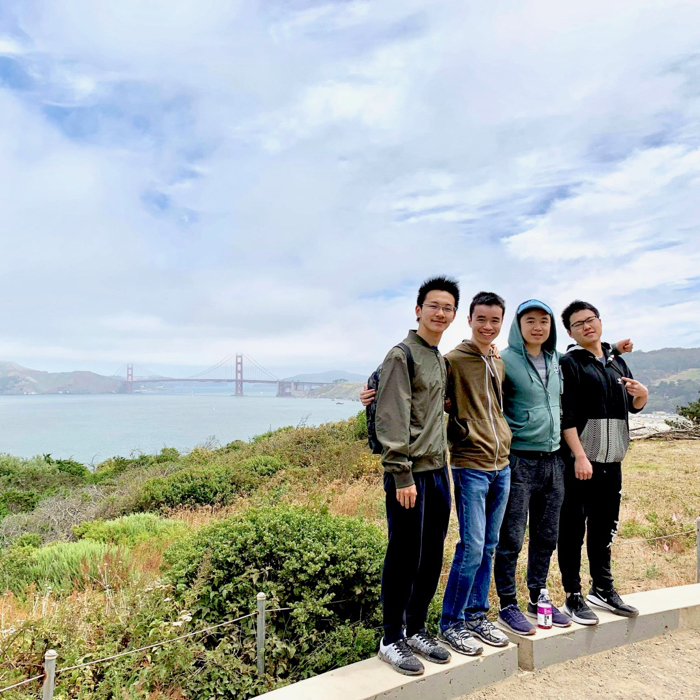 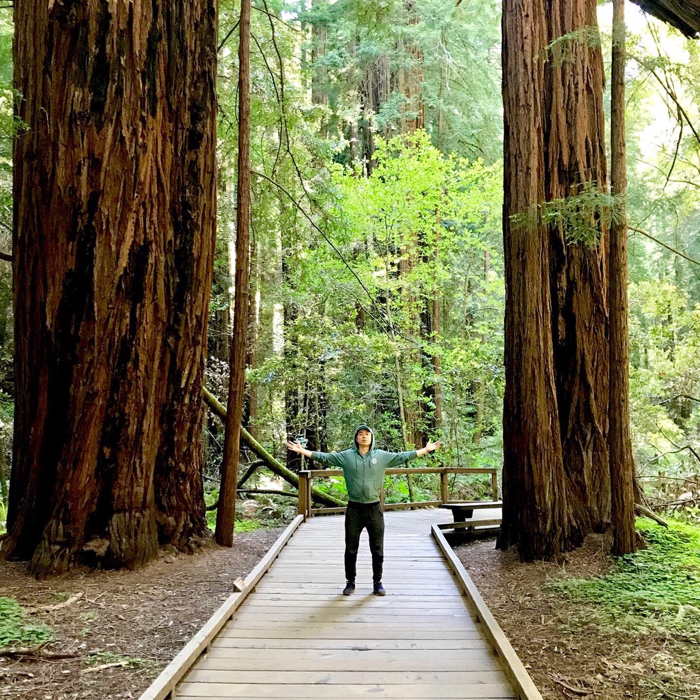 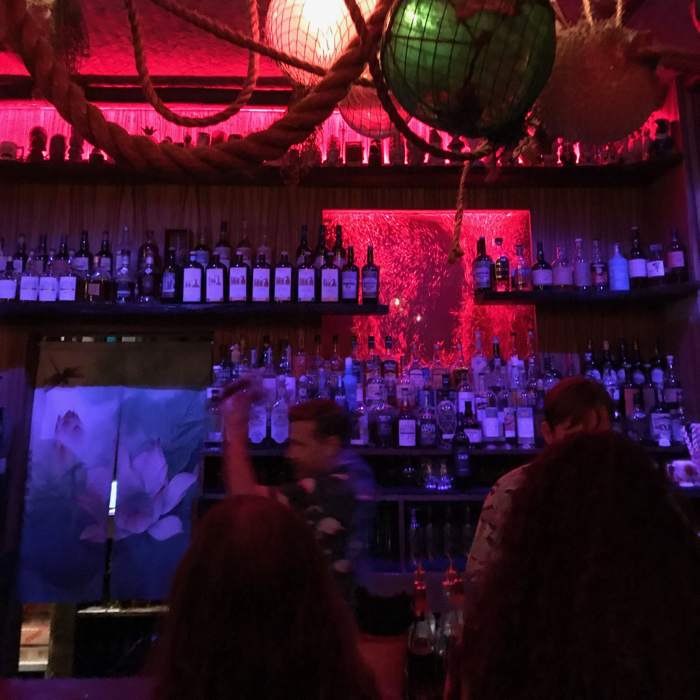 Yosemite. I took a day trip to Yosemite with my friends Kevin, Sosa, Anna, and Nour. I arrived at Kevin’s house at midnight on friday night, slept for about 3 hours, and woke up at 3:30am to drive to Merced for the 5:30am bus to Yosemite. We slept a bit more on the bus and then arrived butt-early in the park at 8:30am. I couldn’t hike because of my IT band injury, and so Nour, Kevin, and I decided to hitchhike from the visitor center in the valley floor to Glacier point at the top of the valley. We waited for about 20 minutes before a hispanic man picked us up (with his son in the back). He said he had no plans, so he drove us to the top and we went for a short hike on the valley floor near El Capitan. We met up with Sosa and Anna at Glacier point around noon, ate lunch at the gift shop, and took a nap on a big rock. Later, Sosa, Nour, and I hitchhiked back down, where a rich businessman and his wife gave us a ride in their sweet Lexus. We really appreciated that they went one hour out of their way to take us back to the visitor center. I’m inspired that people gave us rides for no benefit of their own; both people who picked us up said they had never picked up hitchhikers before. I wonder what led them to do so for us. 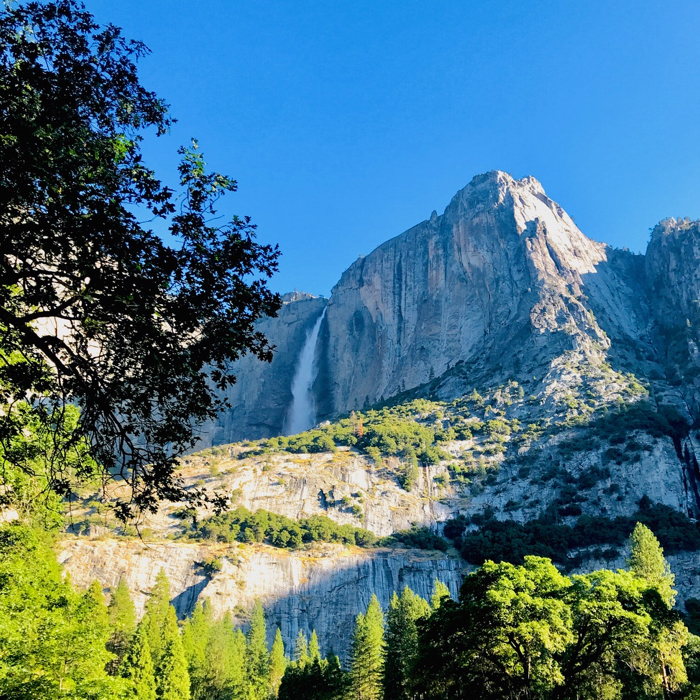 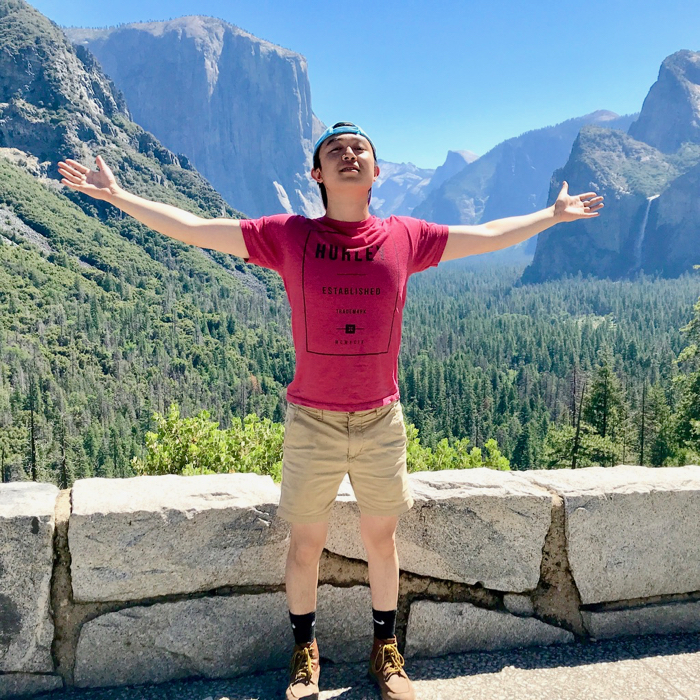 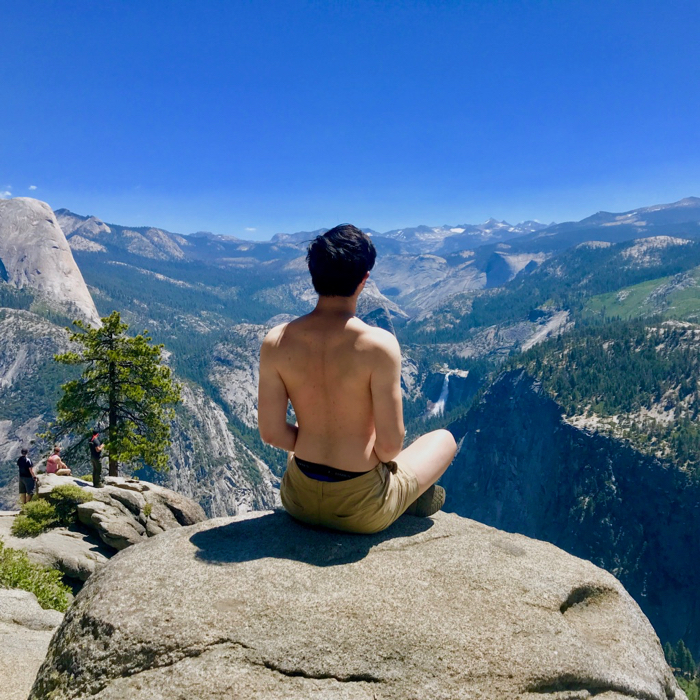 Left, Yosemite falls; middle and right, not sure where that is.

Lake Tahoe. The weekend of August 16-18, I went to Tubestock Lake Tahoe, which was organized by Brendan, a Blend employee and Dartmouth alum, at the Dartmouth Outing Club of Northern California’s cabin. More than twenty young alumni and current students went, and it was a blast. The weather was great, and we spent the saturday playing poker, tubing, then playing Mafia. The vibe was so good.

My paper on data augmentation in NLP was accepted to EMNLP-IJCNLP! (EMNLP is a top-3 conference in NLP.) My first big paper acceptance. ACL actually rejected this paper, so I found the variation in reviewership interesting. Jason: 1, Jason from last quarter: 0.

With my advisor Saeed, I finished up the paper for our colorectal polyp classification study and advised my brother on his study on CycleGAN for colorectal histology images.

I got a membership at the Chinatown YCMA, and tried to lift at around 5, after work. I hurt my knee after playing volleyball and spikeball at the summer picnic, which set me back mentally. And then I got sick for a week. And then my gym closed for 10 days for cleaning. Looks like I always have excuses for not making gains.

Waking Up by Sam Harris. Waking up takes a scientific approach to spirituality. Harris details how to use meditation to recognize that the self is an illusion. Instead of being distracted by thoughts, becoming mindful means to experience more clearly and to “recognize thoughts for what they are.” My interpretation of the book is that there’s some large set of all possible human experiences, and daily life only occupies a small range of that large set. But using mediation, and also with drugs, as Harris talks about later, you can have experiences in a different axis in that experience space that you didn’t know existed.

Harris also makes a strong argument for psychedelics that I found intruiging. He sees them as a sure way to alter consciousness and says that they’re “indespensible for people who need convincing that profound changes in consciousness are possible”, calling them “one of the most important rites of passage a human being can experience.” In terms of positive experiences, he says psychedelics can “disclose layers of beauty that art is powerless to capture and for which the beauty of nature itself is a mere simulacrum.” Of the negative experience, he warns, “I think it may be impossible to imagine what it is like to suffer from mental illness without having briefly touched its shores.”

Throughout the book, I felt, having never done psychedelics, that the concepts he talked about were intangible; I was often confused by the organization of the book and how the pieces fit together.

“If something is nonsense, you say it and say it loud. You will be harmed a little but will be antifragile — in the long run people who need to trust you will trust you.” -Nassim Taleb.

Me on writing papers: In ten years, five years, or maybe even one year, you will probably look back on your previous papers and think they’re terrible compared with your current standards of research. What’s current you’s response to that?